Home > Events > The War within: finance and morality in early modern Europe 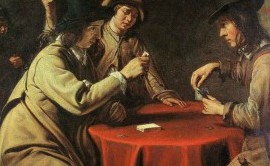 This international conference funded by the Economic and Social Research Council (ESRC) and the Institut Universitaire de France (IUF), and with support from the Centre for Economic History (CeCH, University of Reading) and the Centre d’Histoire Espaces et Cultures (CHEC, Universite de Clermont-Ferrand), will bring together specialists from eight countries to examine some of the societal changes brought about by the long wars of attrition that engulfed Europe between the Thirty Years War (1618-1648) and the French revolutionary and Napoleonic Wars (1792-1815).

While many historical studies have shown that the funding of international warfare had a profound impact on institutional and economic developments, less work has been done on the ways in which European polities responded to the ‘War within’ that pitted those who benefited from war expenditure against those who paid for the military effort. A series of case studies on Spain, Venice, the Dutch provinces, the Austrian Low Countries, Prussia, France, Britain and Sweden will analyse some of the conflicts that arose when the needs and methods of financing war met social demands for morality and accountability. These are fundamental questions that still resonate and have relevance today as governments and societies try to move on from the Global Financial Crisis.