Home > Events > The Voices of the People: An Online Symposium 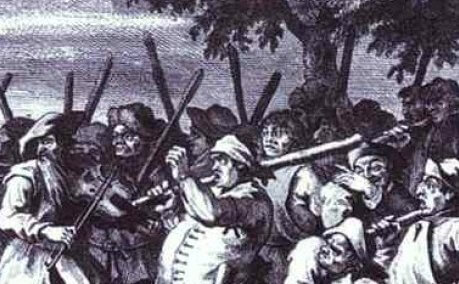 The way history is portrayed in our society – on TV, in films, schools, museums and best-selling books – tends to obscure the experiences and influence of ordinary people. Notable individuals, momentous wars and power politics continue to take centre stage.

The same is not true in academic history. Some fifty years after ‘history from below’ began to make its presence felt in the corridors of university history departments it continues to be an influential branch of the profession. The success of our 2013 online symposium on ‘The Future of History from Below’ suggests, moreover, that it has plenty more to offer in the years to come. Central to its ongoing agenda, as became clear from that event, is a commitment to reaching beyond academia: to bring the ‘history from below’ approach more prominently into the wider public consciousness.

So, we at the many-headed monster thought the time was ripe for another online symposium to follow-up on that 2013 event. Over the next month or so we will be publishing around 20 specially commissioned articles, one every other day (Mondays, Wednesdays and Fridays). The Symposium will showcase of some of the best of academic ‘history from below’, intended to demonstrate the merits of this type of history both to our fellow historians and to a wider public. To that end it is completely free and open access, and we hope it will also be interactive: comments, questions, and constructive criticisms are positively encouraged, both ‘below the line’ and on twitter (#voxpop2015). We will compile a ‘Conclusions’ post at the end of the event based on your comments.

To lend focus to proceedings we have asked all of our participants to use their own research to reflect on the challenge of recovering the ‘voices of the people’ in the past. One of the most common dismissals of ‘history from below’ is that, however worthy the subject, it is simply too difficult to recover the historical experiences of ordinary people, especially from their own point of view. We do not deny that it is difficult, but our contributors here demonstrate that it is possible, and that the hurdles we have to overcome to do so only serve to make us more reflective and careful historians as a result. It should also be said that we do not take our terms – ‘voices’ and ‘the people’ – to be unproblematic, but again we think that reflecting on their complexity, rather than simply discarding them, makes for good history.

In what follows, then, you will read posts that look to recover the voices of people across a range of geographical and historical contexts, though we have made no attempt to be comprehensive and reserve the prerogative – as a blog principally about early modern England – for our main focus to be on… early modern England. If your period, place or theme is not represented please do join the conversation and bring your expertise to bear by adding your insights in the comments sections. We hope you enjoy taking part.

Setting the agenda:
– Mark Hailwood: ‘Introducing “The Voices of the People”: an Online Symposium’ [Coming Tomorrow!]
– Tim Hitchcock: ‘Sources, Empathy and Politics in History from Below’ [Coming Monday!]
– Julia Laite: ‘The Marginal and the Monstrous: The “Voices” of Prostitutes and Traffickers in Modern History’
– Will Pooley: ‘Silences of the People’

Power, authority and voices:
– Nicholas F. Radel: ‘Can the Sodomite Speak? Voicing Sodomy in Early Modern England’
– Emily Manktelow: ‘Gossiping into the Archive: Authority and Speech in the Colonial Archive’
– Gajendra Singh: ‘Reading the Embattled Text: Muslim Sipahis of the Indian Army and Sheikh Ahmad’s Dream, 1915-1918′
– Laura Stewart: ‘Voices and Voicing in the Scottish Revolution, 1637-51′
– Laura Sangha: ‘The Antiquarian and the People: an Intellectual Collaboration?’

The voice of the individual:
– Laura Gowing: ‘”Sometimes in one place and sometimes in another”: Agnes Cooper in Southwark, 1619′
– Helen Rogers: ‘Voices from the Prison’
– David Hopkin: ‘Making Sense of Misery: The Dialect Notebooks of a Teenage Breton Farm Servant’
– Jonathan Willis: ‘Voices of the Disgruntled: Green-Ink Letters in Elizabethan England’
– Jon Lawrence: ‘The Voice of the People? Re-reading the Field-notes of Classic Post-war Social Science Studies’

The event will be hosted here: https://manyheadedmonster.wordpress.com/voices-of-the-people/