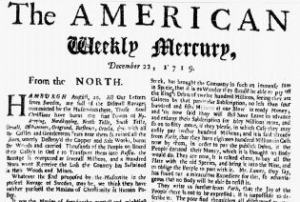 A CONFERENCE FOR EARLY-CAREER SCHOLARS

Our age, in which news travels the world in a split second and fake news has become all too common, has much to learn from the study of the writing and dissemination of news in the early modern era. The modes of news transmission underwent significant change in the seventeenth and eighteenth centuries. In addition to being passed on orally or in manuscript, news rolled off the printing press in increasingly diverse forms.This conference, intended for early-career scholars, will explore the news revolution of the seventeenth and eighteenth centuries, mostly in France, the British Isles and colonial America, but papers on other geographical areas in Europe are welcome, particularly if they seek to map out news networks on the European continent.Various sources may be looked at, such as newspapers, correspondence, placards and bills, broadsides, pamphlets, art reviews and fiction – when it deals with news and news processing.

The following two themes will be given special treatment:• Forms of journalism: what did informing people mean in seventeenth- and eighteenth-century Europe and America? Did it mean communicating news, taking part in controversial debates, arousing interest through provocation or emotion, commodifying news, passing judgments and/or creating literary objects? This may be studied with reference to the media used (types of texts, content?), the target audience (what authors for what sort of readers?), as well as spatiality (the geography of news, the metropolis vs. peripheral areas, international news networks and cultural transfers, translations).• The formation of a public sphere: papers may explore the dynamics underpinning relationships between purveyors of news and readers. They may also study the shaping of public opinion as well as discuss the very notion of public opinion with reference to the political and economic features of France, Britain and America in the seventeenth and eighteenth centuries.

Papers may address – but are by no means limited to – the following topics:

Paper proposals (approximately 250 words in English or in French + a short bio) should be submitted to the organisers by 30 April 2020. The programme committee will send notifications of its selection no later than 15 June 2020.

A selection of papers will be considered for publication.