Home > Events > The Drive for Purity: the Roles of Monastic Orders and the Papacy 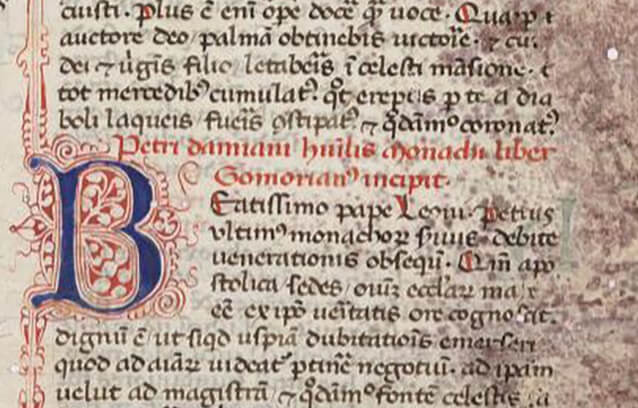 The Drive for Purity: the Role of Monastic Orders and the Papacy is the final workshop in a series of four that aims to investigate the concept of institutional change within the medieval church between 900 and 1150 and how the term ‘reform’ comes to be applied to this. In this workshop we will explore the idea of purity as a motive for change and will trace how different national historical schools vary in highlighting the roles of monasticism and the papacy in instigating programmes of change.

The workshop is part of a larger international project entitled Rethinking Reform 900-1150: Conceptualising Change in Medieval Religious Institutions, funded by the Leverhulme Trust. It brings together scholars and research students from across Europe to focus on how changes in medieval churches were understood and explained in their own day and on how they have been reinterpreted in post-Reformation and especially post-Napoleonic historical writing.

The project is co-ordinated by the University of Leeds (UK), with partners from UEA, Paris VIII, Mainz, KU Leuven, Ghent and Durham. Workshops in January and September 2017, held respectively at York and KU Leuven, and at Leeds in April 2018, gave groups of scholars the chance to reflect on the choice of vocabulary used to define change between the early middle ages and the twelfth century and also the ways in which medieval institutions and individuals created narratives of change.

A final conference bringing the themes of the project together and concluding the discussions will be held at Ghent University in May 2019.The workshop is FREE to attend but places are limited and booking is essential. Refreshments will be served, including lunch on Friday.To reserve a place please email Prof Dr Ludger Körntgen: ludger.koerntgen@uni-mainz.de