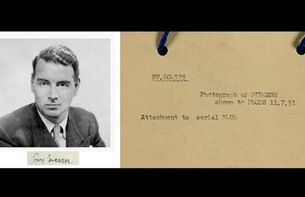 Guy Burgess was a brilliant young Englishman who rose through the ranks of MI5 and MI6 during the Cold War. But as a member of ‘The Cambridge Spies’, he betrayed his country by regularly passing on highly sensitive secret documents to his Soviet handlers.

Historian Andrew Lownie, author of Stalin’s Englishman: The Lives of Guy Burgess – a Guardian Book of the Year and The Times Best Biography of the Year – will talk about how Burgess was able to avoid exposure as a traitor to his country through his trademark charisma and a network of powerful political connections.

Buy your ticket online at:  https://www.eventbrite.co.uk/e/stalins-englishman-the-lives-of-guy-burgess-tickets-22697608157?aff=ebapi