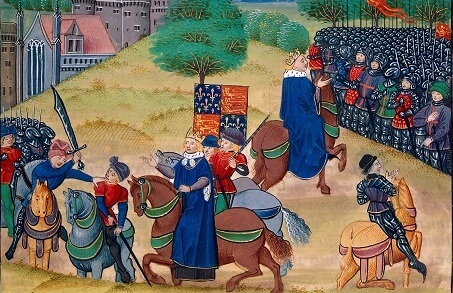 A two-day conference to be held at the School of Humanities at Canterbury Christ Church University, 21-22 June 2019.

This conference will showcase the latest scholarly research on rebellion in medieval Europe, from c.1100 to c.1500. Academic analysis of popular resistance in the middle ages has focused primarily on the causes and/or life-cycle of individual uprisings such as the Peasants’ Revolt of 1381, while a few studies have identified similarities between revolts at either a ‘national’ or local level.

However, there has been little comparative analysis of political protest across ‘national’ borders and over time. The ‘Rebellion in Medieval Europe’ conference will therefore host a discussion between scholars working on different periods and ‘nations’/regions, encouraging pan-European comparisons of popular revolts and the identification of common themes and causational factors.

With papers by both emerging and established scholars drawn from across Europe, the US and Africa, several topics that will be explored include the theoretical justification for resistance against the crown , the roles played by differing sections of medieval society including aristocratic women and the peasantry, and how rebellion could on occasion even act as a force for political stability. There will also be two keynote addresses from Professor Björn Weiler of Aberystwyth University and Dr David Grummitt of Canterbury Christ Church University.