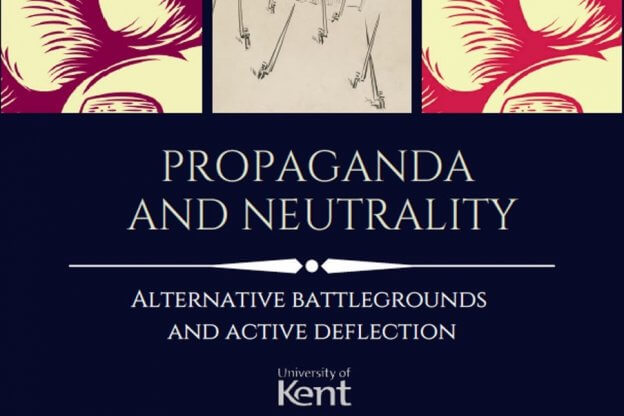 The University of Kent’s Centre for the History of War, Media and Society is organising an international conference at the Institute of Historical Research in London.THURSDAY 24 JUNE 2021

THE CLOSING DATE FOR PROPOSALS IS: 31 OCTOBER 2020

Neutral states have played an important role in international history. Neutrality has often been a constitutional matter of principle, but for others it has been a political or military necessity. Neutrals have often acted as mediators, safe havens and buffers, or fallen victim to short-cuts in other states’ conflicts. Others have ideologically or financially supported one side in a conflict, but have taken a stance of official non-belligerence – militarily neutral, but ideologically committed.

Neutrals have also played the role of alternative battlegrounds for non-military conflicts – through means such as propaganda, rumour-spreading and espionage – either as hosts to proxy engagements between belligerent states; or through belligerent states applying pressure for neutrals to join their side in a conflict (or at least not join the other side). In the latter case belligerent states have often targeted both Governments and the wider population. However, neutral states have rarely been total bystanders in such situations. They have usually had to create policies and institutions to actively deflect pressure from those belligerent states, such as through censorship restrictions and organisations to implement those restrictions. Some have even indulged in propaganda activities of their own to make their case as to why they have remained neutral, and to counteract belligerent state propaganda.

Proposals for papers are welcome from academics and postgraduate students who are studying the role of propaganda in neutral states. Topics covered are likely to be around activities in neutral and nonbelligerent states during times of military conflict – notably the First and Second World Wars such as Spain, the Netherlands, Belgium, Portugal, Sweden and Turkey. However, the conference encourages papers about all aspects of propaganda and neutrality from any time period, primarily from around 1750 onwards, including, but not limited to, the Cold War and policies of non-alignment. Also of interest are studies of propaganda relating to states that have had a longer-term policy of neutrality that have endured both in times of war and peace, and which the policy is core to their identity, such as that of Switzerland, the Republic of Ireland and Costa Rica. The conference aims to have a good diversity of speakers and subjects.

TOPICS MAY INCLUDE, BUT ARE NOT LIMITED TO:

Proposals should be made up of an abstract of no more than 350 words for a 20 minute paper, and a short biography. All papers and proposals should be given in the English language (with courtesy English translations provided of any propaganda documents used which originate in other languages).

THE CLOSING DATE FOR PROPOSALS IS: 31 OCTOBER 2020

The convenors aim to get back to those submitting proposals by 31 December 2020.

COVID-19 As everyone will know, the world has been tackling the Covid-19 pandemic for the past few months. Whilst we hope that the situation will have improved considerably, if not be entirely back to normal, by June 2021, we recognise that there is an ongoing risk of continued disruption at the time of the conference and during preparations over the next year. We will continue to monitor the situation, but plan to develop a solution to enable people to join by video link where that might be necessary. We would probably expect any papers delivered over video link to be a little shorter (10-15 mins) compared to those delivered in the room (20 mins)