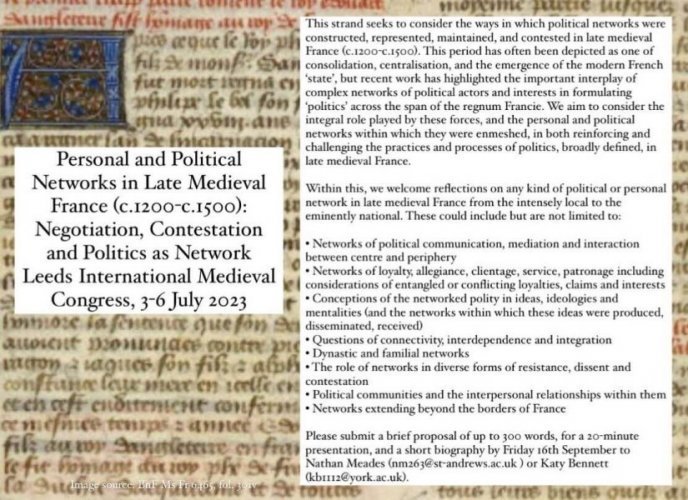 This strand seeks to consider the ways in which political networks were constructed, represented, maintained, and contested in late medieval France (c.1200-c.1500). This period has often been depicted as one of consolidation, centralisation, and the emergence of the modern French ‘state’, but recent work has highlighted the important interplay of complex networks of political actors and interests in formulating ‘politics’ across the span of the regnum Francie. We aim to consider the integral role played by these forces, and the personal and political networks within which they were enmeshed, in both reinforcing and challenging the practices and processes of politics, broadly defined, in late medieval France.

Within this, we welcome reflections on any kind of political or personal network in late medieval France, from the intensely local to the eminently national. These could include but are not limited to:

Please submit an abstract of up to 300 words, for a 20-minute presentation, and a short biography by Friday 16th September to Nathan Meades (nm263@st-andrews.ac.uk) and Katy Bennett (kb1112@york.ac.uk)