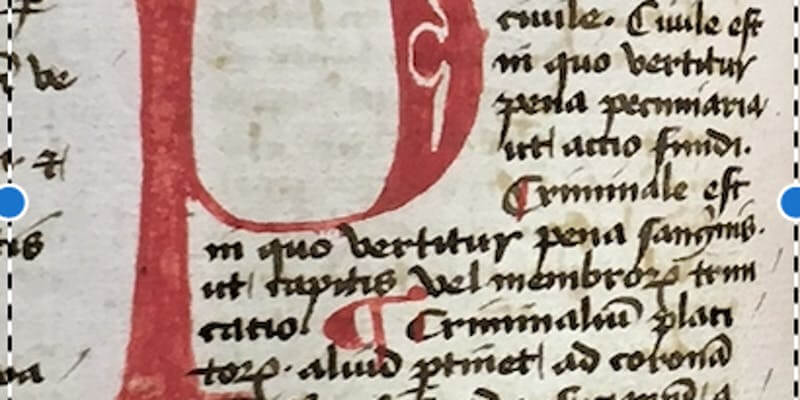 It has long been recognised that Scots law transformed in the late medieval and early modern period, beginning with the development of the session, and followed by the foundation of the College of Justice, eventually prompting the emergence of the modern Scottish legal profession. While there has been pioneering work to demonstrate that the medieval period was not a legal ‘dark age’, there is still a profound sense of a procedural and jurisdictional disconnect between the medieval world of pleadable brieves, and the early modern world of the decisions of the College of Justice. But this sense of cleavage needs some clarification, particularly when thinking through the manuscript culture of Scottish law – medieval and early modern. These shed light on little studied aspects of legal culture legal knowledge, which make the medieval seem less unfamiliar and less disconnected. How did people think about and use law and legal concepts, and how did they conceptualise legal authority? Can we know what non-specialists did with and thought about law? Thinking about legal culture in a broad sense, then, as opposed to procedural and institutional change, may provide fruitful ways of thinking through legal knowledge, learning, expertise and authority in Scotland in a period of profound institutional and legal change. The aim therefore of this workshop is not only to view Scottish legal change over the longue durée but also to identify, where any exist, continuities in the forms of law, legal authority, and legal culture.

This conference is hosted by the AHRC-funded project ‘The community of the realm in Scotland, 1249-1424: history, law and charters in a recreated kingdom’ (http://www.cotr.ac.uk), and organised by Alice Taylor (King’s College London) and Steve Boardman (Edinburgh)

The workshop will be based on pre-circulated papers, which all attendees are expected to read before the colloquium. Places are limited so please sign up as soon as possible!