Home > Events > Heraldry and Piracy: The Courts of Chivalry and Admiralty in Late Medieval England and France 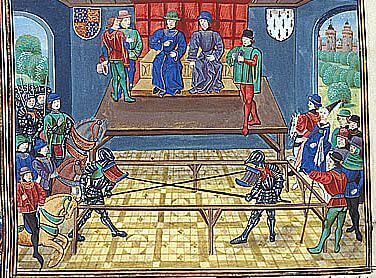 Under the presidency of the Constable and Marshal of England, the Court of Chivalry heard cases that arose out of acts of war, including disputes over rights in prisoners and their ransoms as well as about rights to particular coats of arms. It also took cognisance of appeals of treason, in which battle was offered by the appellant. As with the Admiralty, its jurisdiction took clearer form in the second quarter of the fourteenth century. The wars waged by the English in France led to the need for a tribunal that could deal with disputes that arose on land or sea, beyond the reach of the common law—resulting in tribunals that operated in accordance with the Continental civil law. The developing European cult of chivalry gave greater prominence to the Prince’s position as head of an apparatus that would resolve disputes between members of the noble and knightly ranks, and comparable jurisdictions accordingly also developed in France, under the Constable and Marshals of the kingdom and certain of its duchies as well as under the Admiral.

Complementing the current Leverhulme funded project ‘Law and Arms: the Medieval English Court of Chivalry’, this symposium aims to bring together scholars and those from beyond the academic community interested in broadening this under-researched field. Papers will be given by Richard Barber, Philip Morgan, Andrew Ayton, Ralph Moffat, Julian Luxford, Thomas Kristian Heebøll-Holm, Anne Sutton, John Ford, Lorenzo Tanzini, Bertrand Schnerb and Laurent Hablot. There will also be a Round Table discussion at the end.