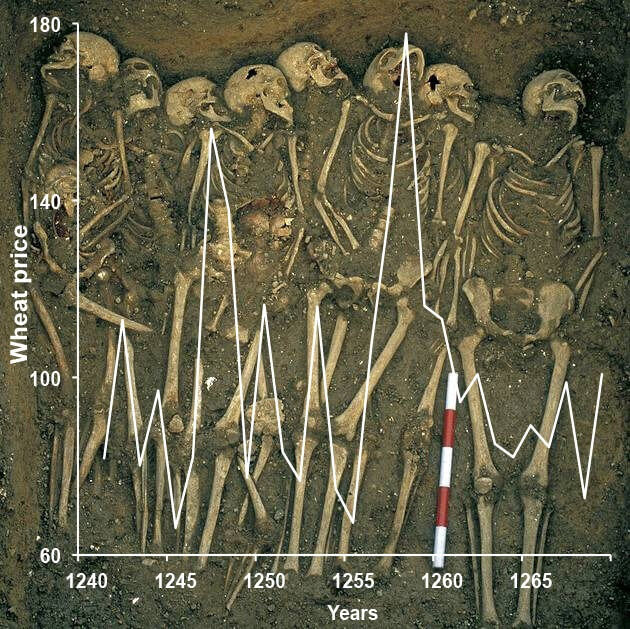 Global climates, the 1257 mega-eruption of Samalas Volcano, Indonesia, and the 1258 English food crisis

Historians justly celebrate 1258 as the year when baronial opposition to Henry III culminated in parliament’s imposition upon the King of the Provisions of Oxford. Less well remembered is the fact that this constitutional conflict unfolded against a background of bad weather, failed harvests, scarce and increasingly dear food, and mounting hunger. Recent discovery of mass burials in the excavated cemetery of the London hospital of St Mary Spital has refocused attention on the plight of the poor at this time of political turmoil, when the superior institutional and economic resources of the capital rendered it a magnet to those in need. Scientific identification in 2013 of the Samalas Volcano, Indonesia, as the source of perhaps the most explosive eruption of the last 10,000 years, re-dated from 1258 to spring/summer 1257, has endowed the food crisis with further interest, for, analogously, it was global fallout from the mega-eruption of the neighbouring volcano of Tambora in April 1815 that was responsible for the northern hemisphere’s notorious ‘year without a summer’ in 1816. Evaluating the seriousness of the English food crisis of 1258 thus assumes considerable comparative significance, always provided that volcanic forcing of global climates and not some other less conspicuous but equally powerful perturbation was responsible for the run of bad weather that led harvests repeatedly to fail. One thing alone is clear, the 1258 food crisis is the earliest of the long sequence of English subsistence crises upon which documentary evidence of harvests, prices and the comments of contemporaries can shed systematic light, alongside that provided by tree rings and other palaeo-climatic proxies. Although less momentous in its consequences than the concurrent political drama, it demonstrates that the weather, food supplies, charitable relief and the poor all have histories as worthy and rewarding of investigation as affairs of state.

Bruce Campbell is Professor Emeritus of Medieval Economic History at The Queen’s University of Belfast, Fellow of the British Academy, co-author (with Steve Broadberry, Alex Klein, Mark Overton and Bas van Leeuwen) of British Economic Growth 1270-1870, CUP, 2015, and author of The Great Transition: Climate, Disease and Society in the Late-Medieval World, CUP, May 2016.