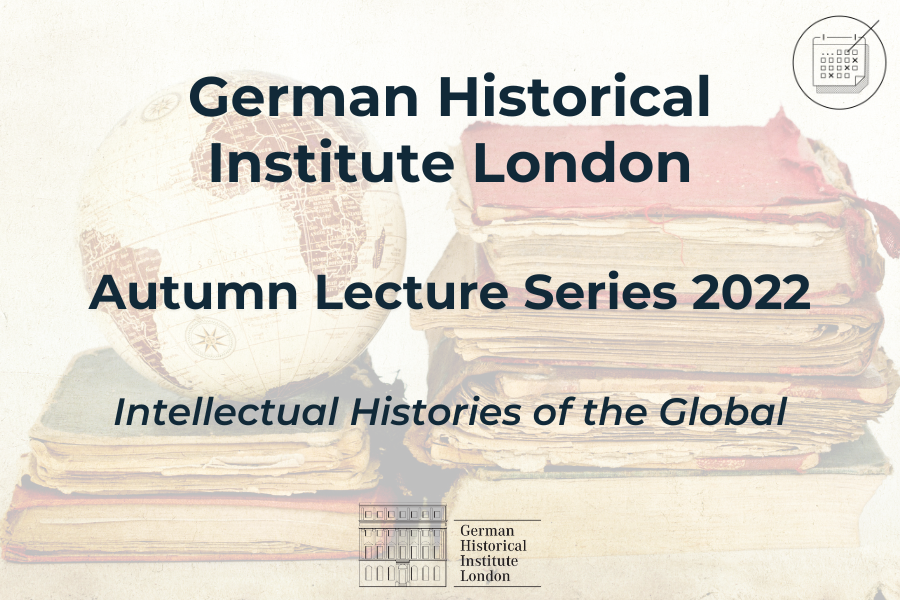 Join us at the GHI London or online via Zoom for our Autumn Lecture Series on ‘Intellectual Histories of the Global’. In the decade since the publication of Global Intellectual History, edited by Samuel Moyn and Andrew Sartori (2013), the field has rapidly become established and it continues to expand intellectual historians’ geographical horizons as well as their tool-kits. The GHIL autumn lecture series takes stock of key developments featuring case studies from the Middle Ages to the twentieth century. Talks focus on what Moyn and Sartori called ‘the emergence of consciousness of and conceptions of the global scale as itself a problem of intellectual history’, that is, the language, materials, and concepts that have allowed historical actors and historians to frame globality as a theoretical, political, or environmental problem.

All lectures will take place as hybrid events at the GHIL (https://www.ghil.ac.uk/home/contact) and online via Zoom. In order to register for one of the lectures, please follow the respective links. When registering for your ticket, please select whether you would like to attend in person or online via Zoom.

In 1980 Eugenia Charles was elected prime minister of Dominica, a small island in the eastern Caribbean, becoming the first woman to serve in that position in the anglophone Caribbean. This talk focuses on Charles’s conception of the global as a political sphere, showing the paradoxes at play in her vision of Dominica as a modern state worthy of global attention rather than a peripheral, insignificant former British colony. Charles’s global vision for Dominica brought some benefits during the Cold War, but by the 1990s, as Western powers turned their gaze away from the Caribbean, this exposed Dominica’s vulnerability.

Imaobong Umoren is Associate Professor of International History at the London School of Economics and Political Science. She is currently completing a book entitled Empire Without End: An Interconnected History of Britain and the Caribbean and a political biography of Dominica’s former prime minister, Eugenia Charles.

This lecture will take place as a hybrid event at the GHIL and online via Zoom. In order to register for this event, please follow this link to Eventbrite: https://www.eventbrite.com/e/ghil-lecture-imaobong-umoren-hybrid-tickets-412726053737.

The Anthropocene is formally diagnosed through physical markers of human transformations of the earth. This materiality asks ‘when’ before ‘how’ and ‘why’. Yet ‘Anthropocene’ values were central to ancient and medieval states, and thus foundational for modern states. Across the globe, early expansionist polities envisaged ‘civilization’ as the successful exploitation by elites of landscapes, ecologies, and human and non-human life. Ceasing to dominate the earth was an illegitimate choice. Our present is best understood as a terrible acceleration of established practices through colonial theft, slavery, harnessing of fossil fuel energy, and the remorseless eradication of alternatives and those who lived them. A better understanding of this history enables us to chart new directions.

Amanda Power is Sullivan Clarendon Associate Professor in History at the University of Oxford. She is currently working on a monograph, Medieval Histories of the Anthropocene. She co-convenes the Climate Crisis Thinking in the Humanities and Social Sciences network and the IHR’s Anthropocene Histories seminar.

This lecture will take place as a hybrid event at the GHIL and online via Zoom. In order to register for this event, please follow this link to Eventbrite: https://www.eventbrite.com/e/ghil-lecture-amanda-power-hybrid-tickets-412733736717.

Many scholars have argued that historical concepts of the global are under-researched. In my talk, I will argue that filling this gap will mean taking a closer look at media representing global connections and differences. I will do this by presenting my research on American designer R. Buckminster Fuller and (West) German historian Arno Peters, both of whom rose to prominence as mediators of the global after the Second World War. Yet, while Fuller epitomized a highly optimistic globalism based on notions of technological progress typical of the 1960s, Peters’s works resonated with a more self-critical globalism, which gained traction in the 1970s. Analysing the history of globalism through the prism of media (and biography) points us to important shifts in twentieth-century political cultures.

This lecture will take place as a hybrid event at the GHIL and online via Zoom. In order to register for this event, please follow this link to Eventbrite: https://www.eventbrite.com/e/ghil-lecture-david-kuchenbuch-hybrid-tickets-412737909197.

Some scholars and scientists identify the Enlightenment as an inflection point in the Anthropocene, a geological age in which humans act as a planetary force. My talk suggests that this inflection point was characterized not only by new means and scales of environmental exploitation, but also by the emergence of climate politics. The naturalist Georg Forster provides a helpful itinerary through this time, from his study of Saxon hydraulics in the wake of the flood of 1784 to his death in Paris during the Terror of 1794. On either side of the Rhine, resource management and disaster mitigation constituted political power.

Patrick Anthony received his Ph.D. from Vanderbilt University in 2021. He is currently a DAAD PRIME Fellow at LMU Munich and the University of Cambridge and is working on a global social history of Alexander von Humboldt’s science as it developed through extractive industries in Prussia, Mexico, and Siberia.

This lecture will take place as a hybrid event at the GHIL and online via Zoom. In order to register for this event, please follow this link to Eventbrite: https://www.eventbrite.com/e/ghil-lecture-patrick-anthony-hybrid-tickets-412740587207.

In political theory and political debates, an implicit expectation looms large: a ‘good’ polity is durable, ideally even permanent. Federal polities are accordingly conceptualized as orders which can regulate heterogeneity and resolve conflict—for the sake of long-term stability. The lecture will question this expectation of permanence by pointing to exceptions in global intellectual history from early Soviet proponents of federalism and the founding fathers and mothers of the Basic Law for the Federal Republic of Germany: when and to what normative end is the idea of permanent federation subverted?

Eva Marlene Hausteiner holds the Chair in Political Theory and History of Political Thought at the University of Erlangen-Nuremberg, a Dr. phil. from the Humboldt University of Berlin, and a Habilitation from the University of Bonn. Her research focuses on the conceptual and intellectual histories of empire and federalism, and on story-telling in politics through conspiracy theories, metaphors, and images.

This lecture will take place as a hybrid event at the GHIL and online via Zoom. In order to register for this event, please follow this link to Eventbrite: https://www.eventbrite.com/e/ghil-lecture-eva-marlene-hausteiner-hybrid-tickets-412747327367.