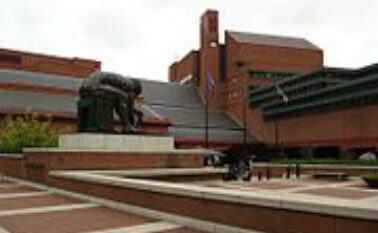 Join the Eccles Centre for American Studies at the British Library for a series of free lunchtime events where writers and scholars will discuss their work and forthcoming publications in an informal setting. Topics to be covered range from the American Revolution to contemporary terrorism, from Alaskan seal hunting to Caribbean literature, and “Vaudeville Indians” to polar explorers via indentured servants, Presidents, Henry James, Emily Dickinson and the Lancashire cotton famine (taking in an Island of Demons and Detroit on the way). The series brochure can be seen here and there are full abstracts for each talk on the Eccles Centre website.

Attendance is free and all are welcome.  Tea and coffee will be provided. Visitors may bring their lunch if they wish. To reserve places for any date visit Eventbrite.

For historians, we have a number of sessions of particular interest:

Sally Hadden (Western Michigan University; Eccles Centre Visiting Fellow) explores what life was like for loyalist lawyers in exile from Revolutionary America once they arrived in England as refugees. Find out more…

‘US Presidents and Iran during the Cold War’

Ben Offiler (University of Nottingham; Eccles Centre Visiting Fellow) explores the importance of personal relationships between heads of state in influencing US policy towards Iran. Find out more…

‘“Vaudeville Indians” on the British Stage’

Martin Thornton (University of Leeds; Eccles Centre Visiting Fellow) discusses the First World War hospital at Cliveden, the Astor estate at Taplow, Buckinghamshire and asks what it meant for Canadian political sovereignty, empire, the broader role of women and the question of sacrifice for Canadians. Find out more…

‘Over the Ice: When Polar Explorers Took to the Skies’

Marionne Cronin University of Aberdeen (Eccles Centre Visiting Fellow) discusses her research into how the use of new, cutting-edge technologies reshaped the popular culture of polar exploration.

‘Sea Birds, Lost Bodies, and Phantom Islands on the Event Horizon of the New World’

J. R. Carpenter (Eccles Centre Visiting Fellow) will present her research on the strange tales of an Island of Demons off the coast of Newfoundland which have persisted in maps and literature from the early 1500s to the present day. Find out more…

‘Transportation Stories: Servants, Convicts, and Class Formation in the Literature of Colonial America’

Matthew Pethers (University of Nottingham; Eccles Centre Visiting Fellow) will discuss the indentured servants and felons who were transported to America in the seventeenth and eighteenth centuries, and their role and representation in an emerging tradition of American working-class literature. Find out more…

‘Committing History: The October 2014 Ottawa Terrorist Attack and the Need for More Historical Writing about Terrorism and Counter-Terrorism’

‘Struggles for Freedom: America and Afghanistan – the Soviet Invasion, 9/11, & the Longest War in US History’

Andrew Hammond (University of Warwick; Eccles Centre Visiting Fellow) places the longest war in American history and the events of 9/11 in a deeper historical context by considering US foreign policy towards Afghanistan since 1979. Find out more…

David Brown (University of Manchester; Eccles Centre Visiting Fellow) reconsiders the case for British intervention in the American Civil War (1861-65). While most scholars suggest this was unlikely, could the Lancashire cotton famine have forced the British government to break its policy of neutrality?

‘“The Seal and his Jacket”: Conservation, Cruelty and Consumption in the Fur Seal Fisheries of Alaska, 1850-1914’