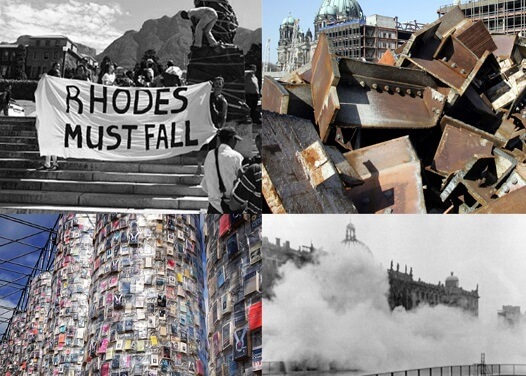 The silenced social challenges of regime change, the teaching of history during local conflicts, Holocaust remembrance in post-colonial societies, the transatlantic slave trade, and imperial collecting in museums — the topics covered in this series will explore histories that, even if not always contested at the time, have become so in recent years. Speakers will debate how these difficult histories around the globe are embraced, remembered, but also very often kept under wraps.

Challenges to Academic Research and Museum Work in Germany and BritainHow can museums and historians reappraise traumatic and partly hidden histories such as slavery, and offer opportunities to enable dialogue about events that society finds uncomfortable? Historian Rebekka von Mallinckrodt, University of Bremen, will first address the little explored topic of trafficked people and related legal concepts in the Holy Roman Empire, a state not usually associated with slaves. Although on the margins of the transatlantic slave trade, eighteenth-century Germany was deeply involved in it. Richard Benjamin, Head of the International Slavery Museum, Liverpool, will then argue that museums of slavery should not only become platforms for dialogue on decolonizing the past and collection practices, but also develop new ways of power-sharing with publics and communities. The talks will be followed by a commentary by historian Catherine Hall, UCL. Chaired by Felix Brahm, GHIL.

National Holocaust Memorials and (Post-)Colonial Legacies. How do colonial history, the Second World War, and the Holocaust intersect? As Britain embarks on the creation of a National Holocaust Memorial, calls have been made for a memorial to and a museum of Britain’s historical involvement in slavery, its colonial past, and their legacies. Meanwhile, scholarship such as Michael Rothberg’s Multidirectional Memory has argued that Holocaust remembrance also has the potential to open up routes for commemorating other contested national pasts. This panel will enable a dialogue between scholars of the Holocaust, colonialism, and the British Empire to reflect on national and transnational legacies. With Avril Alba, Sydney, Yasmin Khan, Oxford, and Tom Lawson, Northumbria. Chaired by Tamar Garb, IAS London.

Two Talks on History Textbooks in Conflicted SocietiesWho owns public history and on what grounds? How does the historian relate to public debates? Across spatial and temporal conflict contexts, debates about the content and role of history textbooks are sensitive, highly political, and often notable for their interminability. Developing a theoretical approach, political scientist Eleni Christodoulou, Georg Eckert Institute, Brunswick, will embrace ‘educational anxieties’ by offering a framework for analysing securitization dynamics that successfully resist and prevent textbook revisions as part of peace-building processes in Cyprus and Lebanon. Neeladri Bhattacharya, former Chief Adviser of the National Council for Education Research and Training in India, will then explore how contested claims of caste and class, region and nation, are played out on the site of history textbooks in India. Chaired by Nandini Manjrekar, Tata Institute of Social Sciences, Mumbai.

25 JUNE 2019 5.30 p.m, FROM COLLECTED TO CONTESTED: The Future of Museums after the Repatriation Debate

European museums have recently come under increasing pressure to repatriate objects from colonial times. But where do we go from here? Does repatriation naturally entail ‘decolonizing the museum’, or might it even prevent museums from doing just that? This panel will discuss what decolonization in the museum might actually mean. How do recent debates fit into the bigger picture of engaging with uncomfortable collecting histories? How could embracing these histories enable marginal and multiple voices to have a say? With Subhadra Das, Curator, UCL, Clémentine Deliss, Curator and Author, Tristram Hunt, Director, V&A, and Alice Procter, Tour Guide and Art Historian. Chaired by Mirjam Brusius, GHIL.

To address the urgent need for living space in the 1950s the GDR government introduced new housing projects based on prefabricated concrete slabs, the so-called Plattenbau. Erected on the outskirts of East Berlin, Zingster Straße 25 in Neu-Hohenschönhausen was one of them and it was completed in 1987. Three decades later the artist Sonya Schönberger visits some of the tenants. Who is still around, and who has moved in since? Her interviews, read by performers Johanna Malchow and Ingo Tomi, tell not just personal stories of daily life in the GDR, but also bear witness to the regime change of 1989, and the often challenging and still under-debated aftermath of social change in a unified Germany. The performance is introduced by Christina von Hodenberg, Director, GHIL.