Home > Events > The Congress of Vienna 1814/15. Stocktaking and Perspectives 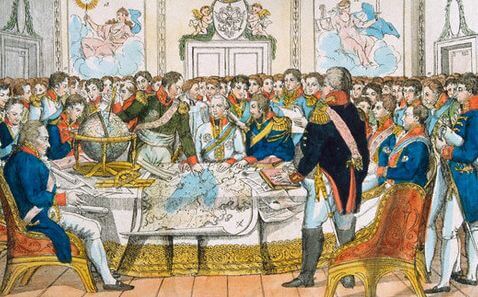 The Congress of Vienna 1814/15. Stocktaking and Perspectives. Workshop organised by the German Historical Institute Paris, in conjunction with the Österreichisches Kulturforum in Paris.

Between September 1814 and June 1815 decisions were made at the Congress of Vienna about the new European order of states following the collapse of the Napoleonic system. What was new here, compared to practice during the Ancien Régime, was that this congress was no longer a matter for plenipotentiary envoys, but took place in the presence of the highest representatives of the states involved, mostly the monarchs themselves. Also new were the forms of negotiation, particularly the process of negotiating the individual objects of dispute in special commissions. Here, along with the central theme of the political restructuring of Germany and Europe, other issues concerning the international order were discussed, for instance, European law for ships at sea and on rivers, the European legation system or the global problem of the slave trade.