Home > Events > Constitutional Patriotism: Founding Documents and the Emotions from Magna Carta to the Declaration of Human Rights 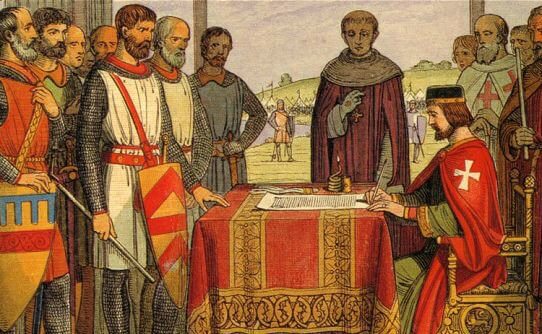 The ARC Centre of Excellence for the History of Emotions, Europe 1100-1800, ‘Change’ Program presents: ‘Constitutional Patriotism: Founding Documents and the Emotions from Magna Carta to the Declaration of Human Rights’ (A Collaboratory at the University of Adelaide, 17 and 18 September, 2015).

When it was signed in 1215, Magna Carta was essentially just a treaty between an embattled Norman king and his fractious Anglo-Norman aristocracy, and most of its provisions were irrelevant to the vast majority of the common people. It is only in retrospect, and through its investment with patriotic emotion by interested rhetoricians like Sir William Blackstone in his Commentaries on the Laws of England (1765-69), that this document and its origins at Runnymede have come to symbolize liberty resisting arbitrary power through ‘due process’ of law. Arguably, the treatment of Magna Carta by Blackstone (and countless others across the centuries) is an example of ‘constitutional patriotism’. Constitutional patriotism is the practice of constructing a unifying ideology that emphasizes emotional attachment to the arrangements of government, and is common in multi-ethnic and/or pan-national states that are or which aspire to be democracies. Jurgen Habermas developed the concept in the context of post-war Germany as a means of combating nationalistic and racial approaches to establishing state identity. As such it is a useful heuristic tool for discussing foundational constitutional documents and their subsequent emotional appeal (or lack of it).  Indeed studying constitutional patriotism may assist in understanding the causes and consequences of collective emotions generally, because affective investment in ink and parchment surely requires special efforts of rhetorical engineering and particular forms of reception.

Within the conference theme, topics papers will explore include:

– Consideration of one or more of the Magna Carta, the American Declaration of Independence, the Treaty of Waitangi and the UN Declaration of Human Rights in this context;
– Prospects for the UK constitutional re-arrangements following the 2014 Scottish referendum and for the European Union and its project of state-building by treaty more generally;
– Modern Australian patriotism and the significance of key documents, as opposed to other symbolic notions or objects such as ANZAC memorials;
– Comparison of the use of emotional rhetoric in documents from different contexts;
– Other critical applications of constitutional patriotism in historical contexts of the UK, Europe, the US and Australia.

The registration fee (including the Collaboratory dinner) is AUS$85.00 for the salaried and AUS$50.00 for students and the unwaged, (register via http://www.historyofemotions.org.au/events by Tuesday 1 September 2015).