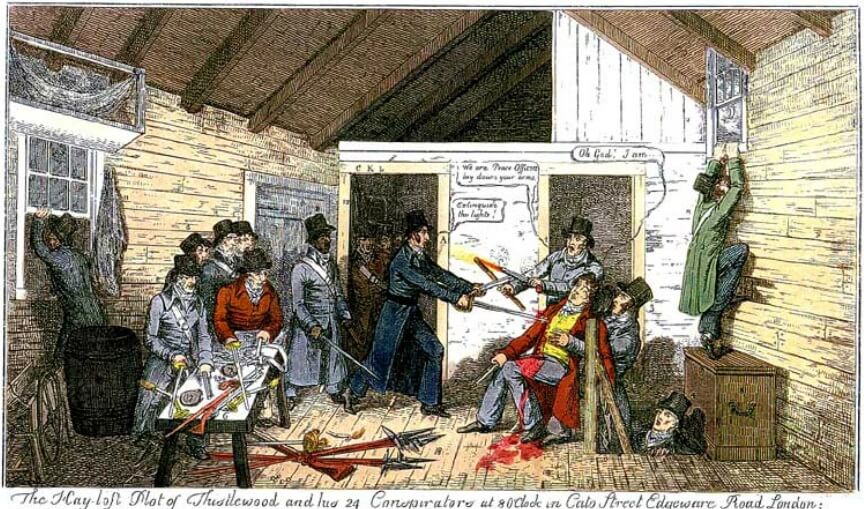 Five men were executed at Newgate on 1 May 1820 for their part in an attempt to assassinate the British Prime Minister, Lord Liverpool, and his cabinet of ministers. The plotters envisaged that they would lead an insurrection across London in the aftermath of their ‘tyrannicide’. The plot is usually referred to as the ‘Cato Street Conspiracy’ after the street in London in which the revolutionaries were arrested. The conspiracy has received surprisingly little scholarly attention, and there has been a tendency among those who have examined Cato Street to dismiss it as an isolated, forlorn, foolhardy and – ultimately – unimportant event. The violent intent of the conspirators sits uncomfortably with notions of what it was (and is) to be English or British. It even sits beyond the pale of ‘mainstream’ radical history in Britain, which tends to be framed in terms of evolution rather than revolution. Even within a revolutionary framework, Cato Street can be discussed as the fantasy of isolated adventurists who had no contact with, or influence upon, ‘the masses’.

This conference will examine the Cato Street Conspiracy through a number of different lenses. These perspectives will shed new light on the ‘plot’ itself, its contemporary significance, and its importance (or otherwise) in the longer history of radicalism and revolutionary movements.

It is hoped to bring together scholars from a range of related specialisms, including history, journalism studies, English literature, criminology and politics.

It is envisaged that the conference will lead to the publication of a high-quality volume of essays in time for the 200th anniversary of the discovery of the plot in February 1820.

For more details about the conference, please head over to our website: