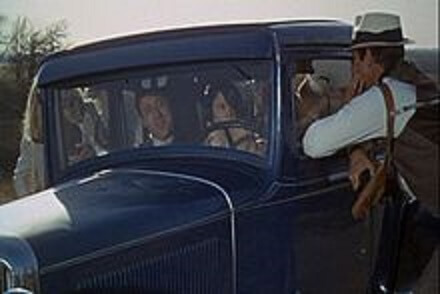 An International Conference to be held at Bangor University, North Wales 4th-6th July 2017.

In 1967, amidst the dying embers of the old studio system, two films were released that extinguished them apparently for good. Bonnie and Clyde and The Graduate suggested the nascent promise of an American New Wave, as directors were emboldened by the collapse of the Production Code; inspired by the stylistic flourishes and narrative seriousness of their European counterparts; carried along by the youthful revolutionary fervour embodied by the optimism of the Civil Rights Movement and protests against the Vietnam War, and granted a creative freedom unheard of in Hollywood as producers and executives floundered desperately for the next big hit after a series of costly flops. Arguably, The American New Wave lasted only thirteen years, flaming out in spectacular fashion with the financial disaster of Michael Cimino’s Heaven’s Gate.The seeds of its demise were sewn even earlier. The blockbuster successes of Jaws (Steven Spielberg, 1975) and Star Wars (George Lucas, 1977) suggested that the following decade would be defined by film entertainment altogether more traditional in which ‘New Hollywood’ (as the New Wave was often known) took a shape distinctly similar to the old, albeit dominated by new technologies and styles. An American ‘auteur’ cinema, it seems, would be consigned to the dustbin of history.

While only very few American New Wave directors have enjoyed long and successful careers – it is difficult to name more than perhaps Martin Scorsese, Woody Allen, Mike Nichols, Robert Altman and Steven Spielberg  (himself belonging more to the latter period than the former) who continued to enjoy  something approaching mainstream success after 1980 – there are several who continue to do interesting, complex work in the margins of American film production, such as William Friedkin (Bug, Killer Joe), Francis Ford Coppola (Youth Without Youth, Twixt, Tetro) and Terrence Malick (The Tree of Life, To the Wonder).

Several of the classical genres, which The American New Wave ‘revised’ to take into account changing political and aesthetic concerns, continue to enjoy revivals inspired by this legacy, such as the Western (The Assassination of Jesse James by the Coward Robert Ford, Slow West, Meek’s Cutoff, to name but a few), while others that the New Wave arguably created, like the paranoid conspiracy thriller, are now part of the cultural landscape of film and television.Furthermore, it is arguable that the belief in creative freedom, personal expression and autonomy which The American New Wave inspired continues to be felt within American independent cinema, with Wes Anderson, Quentin Tarantino, Richard Linklater, Kelly Reichardt, Jeff Nichols and Ava Duvernay (among many others) directing films of aesthetic and political significance on a variety of subjects.

This conference will consider The American New Wave’s cultural, political and aesthetic legacies fifty years since its birth. It will seek to look afresh at the films produced during its short lifespan and assess their continued significance. It will explore the films these directors produced in the years after 1980 to consider how far the values and ideals of the earlier period persisted or whether they were subsumed by the cultural conservatism that has dominated mainstream cinema since then. It will also investigate those filmmakers we might consider to have picked up the baton from their predecessors and pursued challenging material in more recent times.

The conference will be held from 4th-6th July 2017 at Bangor University in North Wales. It is planned to publish the proceedings. A series of complementary screenings will be held at our new Pontio Arts and Innovation Centre.