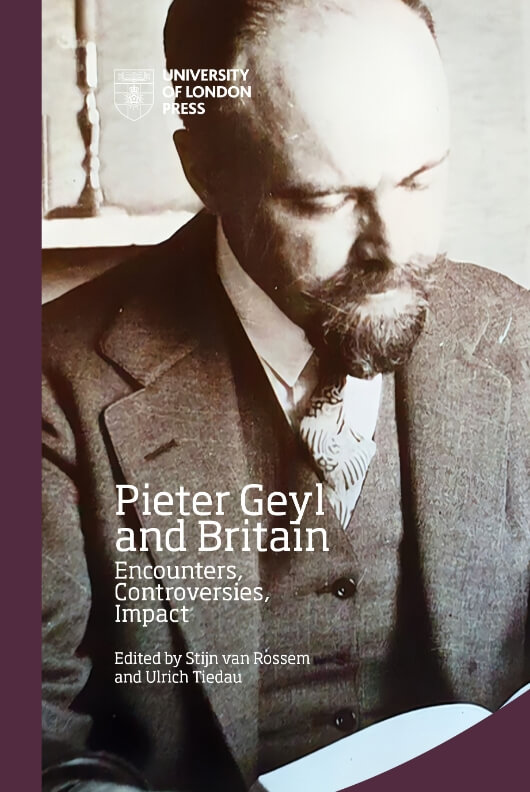 Pieter Geyl (1887—1966) was undoubtedly one of the most internationally renowned Dutch historians of the twentieth century, but also one of the most controversial. Having come to the UK as a journalist, he started his academic career at the University of London in the aftermath of World War I (1919) and played an important role in the early days of the Institute of Historical Research (IHR).

Known in this time for his re-interpretation of the sixteenth-century Dutch Revolt against the Habsburgs, that challenged existing historiographies of both Belgium and the Netherlands but was also linked to his political activism in favour of the Flemish movement in Belgium, Geyl left his stamp on the British perception of Low Countries history before moving back to his country of origin in 1935.

Having spent World War II in German hostage camps, where he conceptualised his major study of Napoleon (1947), he famously coined the adage of history being ‘a discussion without end’ and re-engaged in public debates with Arnold Toynbee and other British historians after the war, partly conducted on the airwaves of the BBC.

A prolific writer and an early example of a ‘public intellectual’, Geyl remains one of the most influential thinkers on history of his time. The present volume re-examines Geyl’s relationship with Britain (and the Anglophone world at large) and sheds new light on his multifaceted work as a historian, journalist, homme de lettres and political activist.

The volume is available freely in Open Access as well as in a hardback version (https://www.sas.ac.uk/publications/pieter-geyl-and-britain).