Home > Events > Blood and Virtue: Nobility of Blood and Nobilities of Soul in the Middle Ages 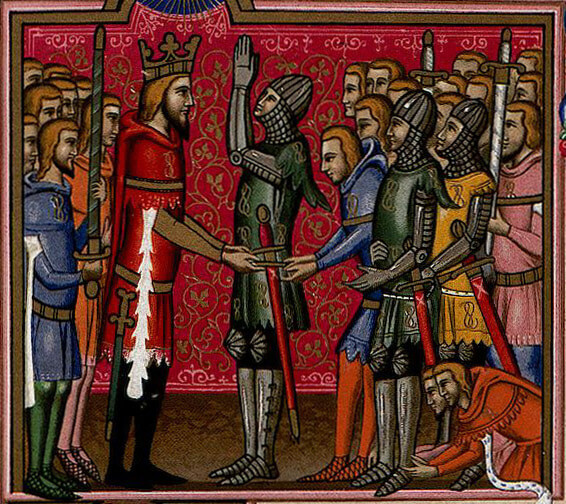 The existence, in the Middle Ages, of a social category with a high situation because of its birth is commonplace. As early as the 7th century, Isidore of Seville played on notus (adjectivized past participle of gnosco, “know”) and its derivatives notabilis and nobilis, and defined the noble as “Someone whose name and family are known”. However, while this quality is inherited, the social pre-eminence of the nobility is also justified by the outstanding qualities and virtues of its members. Around 1030, Wolfhere of Hildesheim recalled that “no one should be considered noble if he cannot prove that he was ennobled by virtue”. The authors of the twelfth century take up this idea at length, relying on the writers of Antiquity and in particular on a famous passage of the Juvenal’s Satires: “What is the point of family trees? What is the point of being famous because of a long chain of ancestors? The only nobility is the virtue”.

This contradiction is reused nonstop by the clerics, who in opposing the nobility of blood and the nobility of soul, intend to criticize the conduct of the aristocrats to propose them a behavioral model closer with the Christian doctrine or to emphasize the overbearing qualities of a personality devoid of blood nobility but holy. Other thinkers quite easily resolve this apparent paradox through the idea of a blood transmission of a predisposition to virtue. If Jean de Meung, in the Roman de la Rose, first of all, affirms “No one is noble unless he is attentive to virtues… Nobility comes from qualities of the heart. For nobility of lineage is not nobility that is worth if the goodness of the heart fails it”, he then adds “Also in them must reappear the greatness of soul of their parents who conquered the nobility by their great exploits”. The consensus around the superiority of soul nobility over blood nobility results in a social expectation of the existence of these ethical qualities in those to whom we recognize a hereditary pre-eminence. This also implies the possibility of his loss. The social value of blood and birth is therefore counterbalanced by the individual behavior that reflects on each nobiliary dynasty.

Starting from the observation that the tension between blood and virtue in the conception of the nobility still deserves to be dealt in depth and the need to synthesize the often-scattered research on these questions, the first day of prospecting was held in May 2021. It appeared that the ethical dimension of the representation of the nobility offered a field of research still in part to be explored and that it was a particularly rich and promising approach to renew the nobility studies. The purpose of the draft colloquium resulting from these first reflections is to examine how they are articulated, in medieval Latin Christianity, hereditary nobility and nobility of soul. It invites the participants to consider the shared or, on the contrary, antithetical mental representations that non-nobles and nobles could have of the ethical dimension of the latter’s social role. It calls for a broadly interdisciplinary approach, insofar as these themes relate to history, art history, the history of law, and literature. The temporal and geographical framework must make it possible to grasp both continuities and regional developments or specificities.

We propose three themes of reflection for this colloquium:

Theme 1: Blood nobles’ Nobility of soul
This first theme questions the theoretical conceptions of the nobility of soul and the virtue that is expected from the nobles. To what do these ethical qualities which are demanded of nobles correspond? What are the expected behaviors of a nobleman that justify his social supremacy? Can we speak of a firm’s unequivocal position in the face of these expectations? Are there competing models? How is the virtuous noble or, on the contrary, its antithesis represented in iconography or literature? How do we think about the relationship between the virtues that are passed on hereditary and the good acts that would come under an individual free will?

Theme 2: Nobility of soul as a social fact
The question here is how these theoretical conceptions are translated into reality. Do nobles feel bound by ethical obligations? Is the dialectic between blood and virtue reflected in the system of values that the nobles pass on from generation to generation? Does it translate into its political and religious commitments? What about the non-Christian communities within Latin Christendom?

Theme 3: Nobility of soul as a criterion of nobility.
This third theme aims to question the nobility of the soul as a discriminating criterion within the aristocratic social group, but also within society as a whole. Can the recognition of ethical qualities lead to an anomaly? Does ethical merit facilitate integration into the nobility? Is it perceived as a determinant of social ascension? What is the share of the ethical aspect in the existence of ennobled or, on the contrary, derogatory professions? What part does the absence of these «qualities of heart» play in the decline of a nobleman? Is it possible to lose one’s nobility for exclusively moral reasons? Does the fall of an individual lead to the damnatio memoriae of his entire house? Are there opportunities to regain nobility after a forfeiture? What about the children of a fallen nobleman? How does this translate both symbolically and concretely?

The communication proposals should correspond to the themes of reflection developed above. They will take the form of a summary (300-500 words), accompanied by a provisional title. They must be submitted by email in Word or OpenOffice format (.doc, .docx, .odt) to the organizers before 1 June 2022.