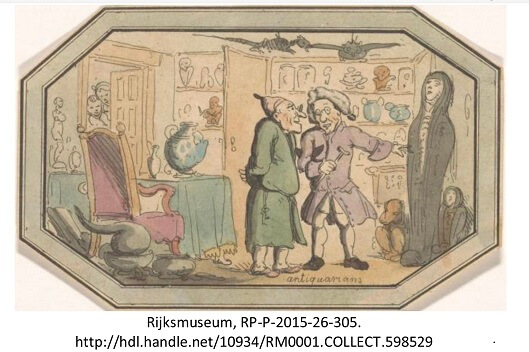 1 and 2 April 2019 Antiquarian ‘Science’ in the Scholarly Society

Society of Antiquaries of London.

In this workshop, we will explore how ‘antiquarian science’ informed collecting in the early modern scholarly academy, as many members of these societies like astronomer Martin Folkes (1690-1754) also were connoisseurs and antiquaries. Folkes was Newton’s protégé, President of both the Royal Society and Society of Antiquaries of London, and he may have even tried to unite the two societies as they had many common members and goals.

What was the relationship between archaeological fieldwork or antiquarianism and learned travel or the Grand Tour? What does collecting on tour say about the manner and scale of personal and institutional contacts between London and the scientific world of the Continent? What tools of natural philosophy were utilised to understand buildings and artefacts? What were the implications of the collecting of ethnographic objects for political dominance and Empire?

A working session using sources from the Society of Antiquaries Library and Museum is part of the programme. The Society’s library is Britain’s oldest major research library for archaeology, architectural history, decorative arts (especially medieval), material culture and the historic environment.