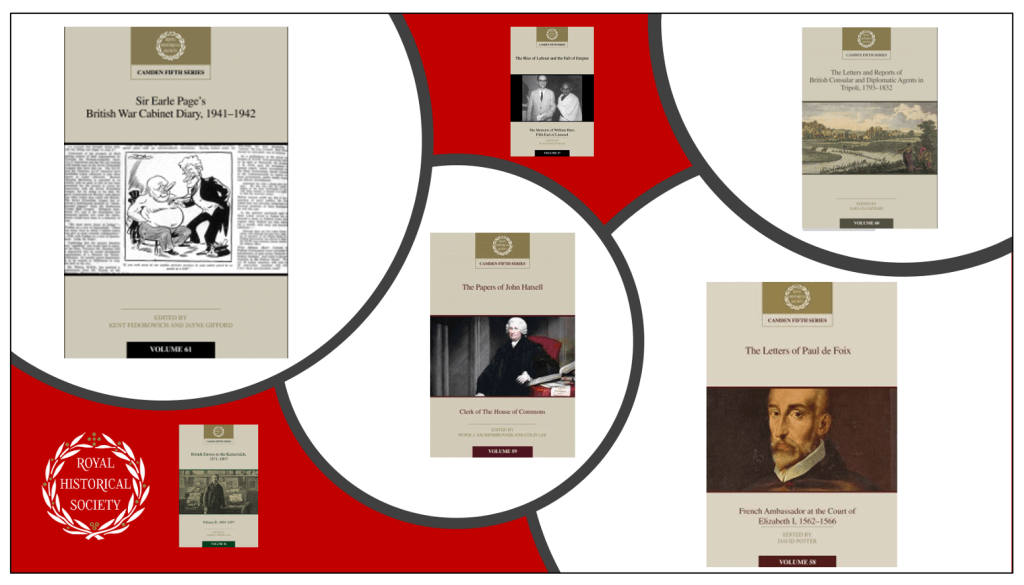 The Royal Historical Society seeks to appoint two academic Editors to lead on the scholarly content and creative development of its prestigious Camden Series of primary source volumes, published by Cambridge University Press.

The Camden Series has to date been edited by members of the Society’s Council. The Society now seeks two external appointments to take on the work of editing and developing the Series—in line with its recent creation of external editorial roles for the RHS journal, Transactions of the Royal Historical Society.

For the Camden Series, we are looking for two editors with complementary research expertise in British history, broadly defined—one in medieval/early modern, the other modern history. Applicants must also be Fellows of the Royal Historical Society. We anticipate that the two new appointments will take effect from 31 January 2022. Appointments will be for 2 years in the first instance (renewable for a further 2 years), subject to the successful completion of a probationary period.

The RHS Camden Series is an extensive and well-established collection of primary source editions, with a focus on British history, broadly defined, and including the history of the British world. New titles are published in book form and online. Each volume is accompanied by a specialist historical commentary and scholarly editing, undertaken by experts in the subject.

The Royal Historical Society currently publishes two new volumes in the Camden Series each year. Recent titles in the series (2018-2021) include:

The complete Series now comprises more than 325 volumes (dating from 1838 to 2021), making it a key collection for primary research. Through creative use of its online format, there is now also considerable potential to extend and develop this contribution in new ways—especially to early career historians less familiar with the Series.

About the Camden Editorship

To pursue the roles of future commissioning, editorial oversight, and creative online development, we now seek two editors with complementary research expertise—one in medieval/early modern, the other in the modern history of Britain, including the history of the British World.

Given the nature of this dual appointment, and the need for collaborative working, we welcome joint applications from two potential editors to work together; however, individual applications are equally encouraged. Applicants must be Fellows of the Royal Historical Society.

This is an important new phase for the Camden Series as we continue its annual publication, and seek to develop its use for researchers as an online resource.

The position attracts an annual honorarium currently set at £500 per editor. Ideally, the successful candidates will be able to take up the position on 31 January 2022. The new editors will receive a full handover from the outgoing Camden Editors (Professor Andrew Spicer and Professor Richard Toye) and ongoing support from the RHS’s Academic Director and other staff at the Society. The editors will also become ex-officio members of the Society’s Publication Committee, which will serve as an advisory board to the editors. The successful candidates will have a six-month trial period before committing to take on their positions.

The Society currently welcomes applications for several other publishing roles — including editorships for the Transactions of the Royal Historical Society and the editorial board for New Historical Perspectives. If you wish to discuss which of these post might be suitable for you, please contact Professor Emma Griffin, RHS President (president@royalhistsoc.org).

Application for the Editorships is via the RHS Applications Portal.

Roles associated with the Editorship

Specifications for the Editorship

In appointing the two Camden Editors, the RHS seeks applicants who have:

Submission must be made via the Society’s applications platform.

Those interested in making an application for one of the two Camden Editor posts should send:

Informal enquiries about the role may be made to: Professor Andrew Spicer, early modern (aspicer@brookes.ac.uk) or Professor Richard Toye, modern (r.toye@exeter.ac.uk).

Questions about the application process may be sent to: administration@royalhistsoc.org.

Application for the Editorship is via the RHS Applications Portal.